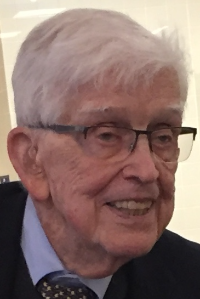 The Honorable Gerard F. Doherty of Charlestown
passed away on June 16, 2020 at the age of 92 in the home where he was born on Washington Street. He was a graduate of Malden Catholic High School, Harvard University, and Wayne State University, where he obtained a Master’s degree in public health administration and then to Suffolk University Law School.

He was known for his many professional accomplishments as a lawyer, real estate developer, Member of the Massachusetts House of Representatives, Chairman of the Democratic Party and as political campaign manager extraordinaire.

Gerard’s law practice spanned more than 50 years specializing in real estate law. He was involved in the development of many real estate projects throughout New England, the most notable of which were Admiral’s Hill in Chelsea, MA and the conversion into affordable housing of the State Prison in Windsor, VT.

Gerard’s political career started with his election as a member of the Massachusetts House of Representatives. He continued in politics as an intimate of the three Kennedy brothers: Jack, Bob, and Ted. He first met President Kennedy in front of his home on Washington Street in Charlestown in 1947 during the Bunker Hill Day Parade. Ted Kennedy’s successful first campaign for the United States Senate was managed by Gerard. He also managed Robert Kennedy’s successful presidential campaign in Indiana. Gerard also managed Lyndon Johnson’s presidential campaign in Massachusetts and Jimmy Carter’s presidential campaign in New York. The New York Times referred to “Gerry” as a “campaign impresario.” President Carter designated Gerard as a United States Delegate to the funeral of Pope John Paul I and as a delegate to the American Russian Housing Committee.

For more than 25 years, Gerard was actively involved in the Kennedy Library, serving as a Trustee and a co-chair of the Annual Profile in Courage Award Dinner. He was a staunch supporter of the EMK Institute. He recorded his political adventures in a memoir, They Were My Friends – Jack, Bob and Ted, My Life In and Out of Politics.

To those who knew him best, he will be remembered for his many unpublicized acts of kindness and generosity to friends and strangers, both financial and non-financial. Gerard was always noted for his intense loyalty and generosity to family, friends, schools. Gerard served on numerous boards of Trustees including Malden Catholic, Our Lady of the Elms College, Suffolk University, Pioneer Institute, Massachusetts Board of Regents for Higher Education, the Irish immigration center, RIAN, the Massachusetts Eye and Ear Infirmary. His favorite organizations were the Charlestown Knights of Columbus Council # 62, Charlestown Old Schoolboys Association and the Bunker Hill Associates. Gerard was instrumental as a founding member of JFK Family Service Center of Charlestown and Charlestown Catholic Elementary School. Gerard cherished his Charlestown roots.

Relatives and friends are invited to attend Gerard’s Funeral Mass on Saturday June 20, 2020 at 11:00 A.M. in St. Mary’s Church, 55 Warren St. Charlestown. (Facial coverings are required inside church). His burial will take place at Holy Cross Cemetery in Malden. There are no funeral home visiting hours.

The church will not accept any flowers.